Travel insider Jürgen Linnenbürger enjoys every second of his round trip through Kent at one of the world’s most traditional and renowned golf clubs. 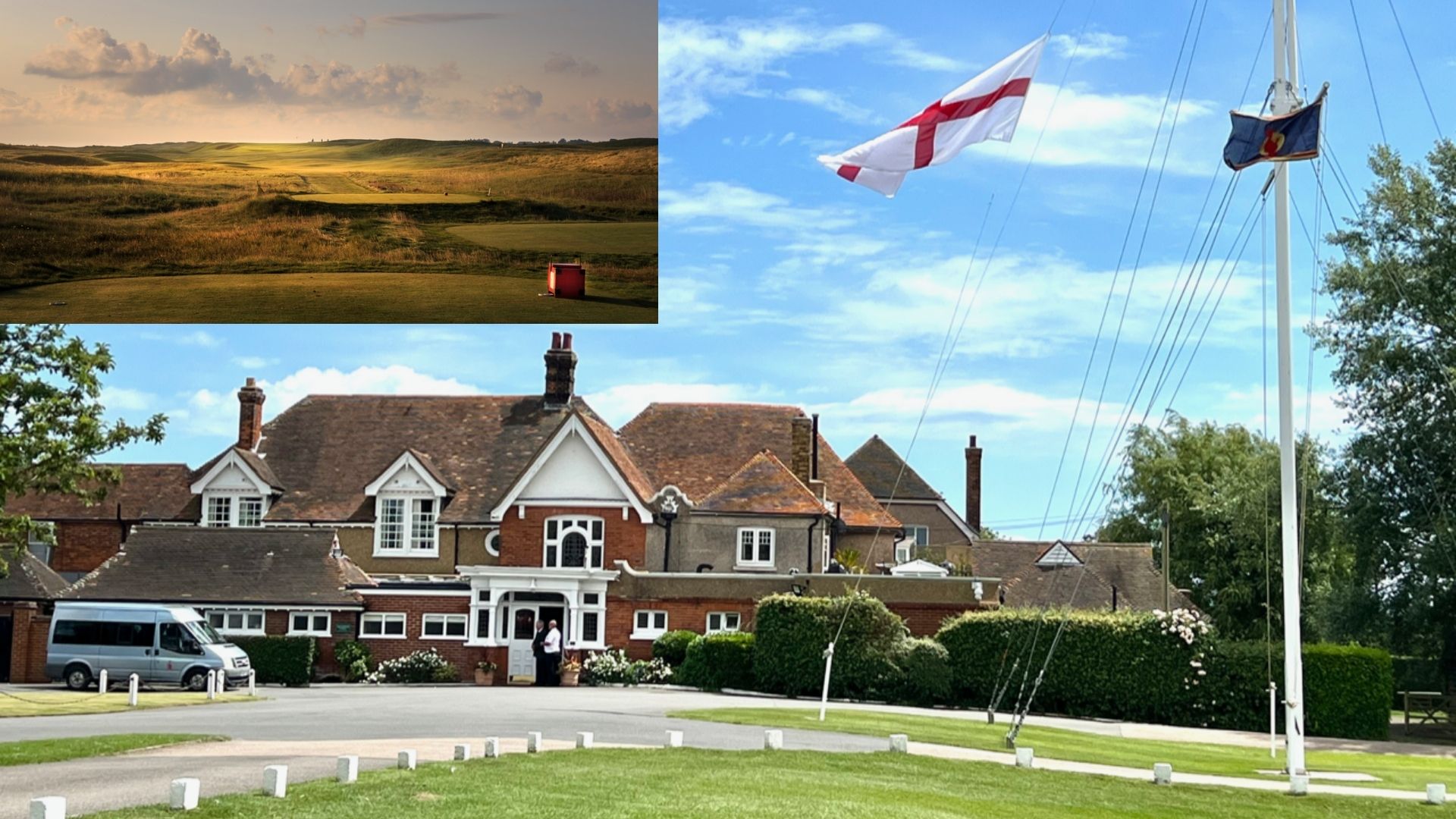 The best of the best

In many rankings it is considered England’s number one. It is currently
ranked 22nd in the world, making it one of the most recognised on the
golfing globe. Tradition and style meet the highest quality and class.
Everything here is special.

Its beginning dates back to 1887, when it was founded by Dr William
Laidlaw Purves as England’s equivalent of St Andrew’s in Scotland. It is beautifully situated, right on Sandwich Bay on the shores of the English Channel.
In 1894, the first Open Championship outside Scotland took place here. In the meantime, this event, which is regarded as one of the world’s most important tournaments, has taken place 15 times at this location. Nowhere has it been held more often outside Scotland. The club last
hosted the tournament in 2021, the 149th time it has been held.
The list of notable professional and amateur competitions held here is
endless.

The board hanging in the clubhouse lists winners from three centuries
now. Darren Clarke in 2011 and Collin Morikawa in 2021 were the last two winners to take possession of the coveted Claret Jug trophy in Kent.
The sensational layout of the course owes much to several notable
architects. In addition to the founder mentioned above, they include
Allister McKenzie and Frank Penning.

The club is a Private Members Club, but opens its doors to non-members on certain days at certain times. Guests are welcome and will receive a warm welcome. However, some rules apply to them, as published on the club’s website.
They may sound antiquated, but from my point of view they fit perfectly with the tradition, to which a lot of importance is still attached. Nothing is modern here, but everything is dignified and noble. Old school golf at its best.
This includes, among other things, that golf clothing may only be worn in the clubhouse until 11.00 am. After that, gentlemen wear a jacket and tie, ladies an appropriate outfit although on the terrace and in the snack bar, golfing outfits are accepted all day.
If gentlemen opt for shorts, they are to be worn with knee-high socks with members often wearing red and green striped club socks. Golf shoes and caps, as well as wet weather golf clothing, are taboo in the clubhouse.
Guests are requested not to change in the car park, but in the locker
rooms, which are furnished with fine wood. Mobile phones are frowned upon on the course and in the clubhouse but fine to use whilst in the car park.

Originally, it was planned to have lunch before our round in the famous dining room of the venerable clubhouse. However, this reservation was cancelled at short notice, as on the day of our visit about 300 members had gathered there to commemorate the life of a recently-deceased former President. So the sacred halls remain inaccessible to us. Instead, we spend some time on the al fresco terrace overlooking beautiful gardens.

While changing, I clearly notice how my excitement slowly increases. Then it’s off to the course as my adrenaline level continues to rise and my heart races. I try to block out who has teed off at this spot since 1887 and concentrate on my first tee-shot. St George’s is a 2ball course except on Tuesdays which is when the majority of visitors usually play as 3balls or 4balls.

Unfortunately, the initial sunshine leaves us and the cloud cover increases considerably, but it stays dry and the usual strong wind stays within limits.

Then it starts. I take a deep breath and try to block out everything else. Richard, our caddie, recommends me to play an easy draw. Nothing easier than that.

‘Well done’ Richard comments on my tee shot. Then we race off as
leisurely golfing is not the order of the day here. Anyone who needs more than 3 1/2 hours for the 18 holes as a 2ball is out of place.

Perfect conditions throughout the course

The par 70 course has a length of 7,204 yards from the championship
tees. Unlike most classic links courses, the front nine does not run away from the clubhouse and the back nine back to it. Instead, the holes are laid out in more of a big loop, so you don’t play one hole into the same direction. This means having to readjust to the usual wind on each hole.
On eight of them you play directly along the Channel.

Even the tee boxes stand out because of their perfect condition. Other
clubs would be happy to have greens like this. This impression continues seamlessly on the course. The very undulating fairways are mown extremely short. I hardly dare to hit a divot.
The balls roll without end. They don’t always go where they’re supposed to, but they make length. Even if I think I’ve hit the middle of the fairway, that doesn’t mean the ball will come to rest there, but Richard, who seems to have eagle eyes, helps.

The views of the Channel are magnificent. The naturalness of the course cannot be surpassed. Nothing here has been artificially created, but everything has been left in its original look and feel. The dunes are huge and sometimes severely restrict the view of the fairways. These blind tee shots require confidence and self-assurance.
The dune grass sways in the not too strong wind. After last week’s rain
and the subsequent sunshine, it has literally exploded. It looks more
harmless than it is. Getting out of the dense rough is almost impossible.

After only a short time, we realise that the HCP limit of 18.4 is completely justified. If we stay in the game, greens await us that we have not yet experienced in this form. Where and how should the ball come to rest on the partly huge, inverted saucers?

They are ondulated, furiously fast and surrounded by huge run-off areas. Two putts are a great result, but we only manage this if we hit the greens perfectly. And that doesn’t happen too often. The white flags bear the red cross of the patron Saint George. We need his help.
And then there are the bunkers – the regular and the pot bunkers. They are as pristine as you would expect on a true links course.
The highlight is the one at the four. Until recently, it was still supported by 93 railway sleepers on the sides though these were recently removed for safety reasons. This blind tee shot must be played uphill over a dune.

After about 150 metres, lies the deepest and steepest bunker in the entire United Kingdom. Richard tells us that it is also called ‘coffin’: once you are in it, you never get out again! I am the best example, as the photo proves. After three unsuccessful attempts, I buried the score on this hole.

It is the second most difficult hole of the 18 exciting holes, which are all different and have their own names. This one is unsurprisingly called The Himalayas whilst other well known ones are called The Maiden, Sahara and Suez Canal.
Each hole has its own great charm and remains memorable for us. The
front nine should allow for the better score, as the back nine is even more challenging. The lengths are brutal for average HCPers, especially when the wind comes into play. This kicks in on the back nine and makes the last holes a special test for us.

Drinking water is available at various points on the course, even for four-legged friends. Only toilets we look for in vain. Richard thinks we should use mother nature.

After 18 holes we are exhausted: mentally and physically. But richer by an experience that is one of the most extraordinary we have ever had on a golf course. Golf at its purest. This alone counts. The result is absolutely secondary.

We politely thank Richard for his great job, pay him the usual fee of GBP 50,- and give him the well-deserved tip. This was already because of the balls he found again in the deep rough. So our loss was absolutely manageable.
We will keep every moment of this unforgettable day on one of the world’s most impressive golf courses in best memory.
Cologne, June 2022
Juergen Linnenbuerger